$ 52.00
Availability: Due to shipping restrictions, this product is not available. 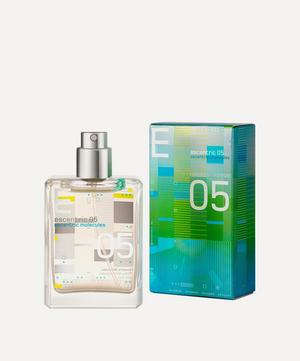 Escentric 05 is the fifth pyramid fragrance by Geza Schoen – another ingenious creation borne from the perfumer’s unique concept, which seamlessly marries art and chemistry. With an unusually complex character for a single molecule, Cashmeran has earned its place as a perfume in its own right – first created in a laboratory in the late 1970s. Here, a 15% concentration of Cashmeran is complemented by bright and happy top notes of bergamot and orange, a herbaceous heart of rosemary, juniper and cypress, and a resinous, balsamic dry down of cistus labdanum and mastic – along with a touch of fig, in an ode to its Mediterranean inspiration. This portable rendition is designed to replenish your Escentric Molecules metal travel case.

“Cashmeran is dry, radiant, warm and woody with an unexpected touch of pine resin. That gave me the idea of creating a different kind of summer fragrance. I wanted to evoke being by the sea, but not by using the usual marine notes, which I find too artificial. Instead, I wanted to recreate the experience of being on an island in the Mediterranean.” – Geza Schoen, Escentric Molecules perfumer