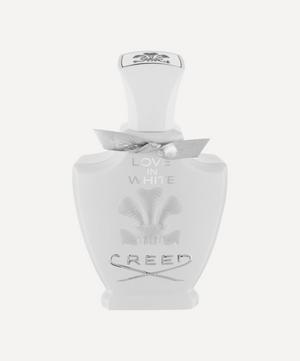 Like a fresh spring breeze, Love In White carries the scent of the season's first blooms – a sophisticated and feminine floral fragrance.

This clean fragrance envelops skin in a light veil of hyacinth and magnolia, with breezy undertones of daffodil, white iris and tonka bean. A quintessentially romantic aroma that lends itself beautifully to life's precious moments – making a sentimental mark on a wedding or anniversary.

A Paris-London perfume house that has been pleasantly entangled with royalty since its founding in 1760, Creed was established when Henry James Creed sent a pair of scented gloves to the dashing young King George III. Since then that fateful gifting, the house has remained in family hands, passed down from father to son for eight generations. Now led by Olivier Creed, one of the world's most admired perfumers, Creed is renowned for using the richest, highest quality ingredients from around the world – Bulgarian rose, Haitian vetiver, Calabrian bergamot – to create its imaginative and distinctive fragrances.
Read more Read less