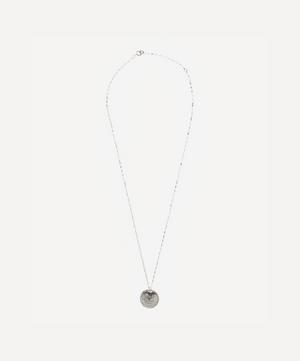 The silver Snow Lion necklace is a unique sterling silver pendant piece from Alighieri - the London-based jewellery brand named after the renowned Italian poet, Dante, and inspired by the designer's literary background.

Each Alighieri piece is inspired by a different poem from Dante's Divine Comedy. The Snow Lion pendant necklace has been restored from an antique Venetian coin, using Alighieri’s lost wax casting technique. It features a textured lion on the front to reference Dante’s own frightful confrontation with the wild beast. A modern heirloom, it is an ultra-wearable statement piece that can be passed from generation to generation and is designed to provide the wearer with courage.

After graduating from Oxford University in 2012, Alighieri founder Rosh Mahtani dreamed of creating modern heirlooms based on the French and Italian literature she had studied. Two years later, Alighieri was born. Named after the renowned Italian poet, Dante Alighieri, every piece is inspired by one of the 100 poems in his 14th century epic, the Divine Comedy. A brand firmly rooted in literature and travel, the designs are battered, imperfect and a little bit melancholy, with each one crafted sustainably from gold-plated recycled bronze through the process of lost-wax casting. From whirlwind adventures and mythical creatures to scraggy landscapes and passionate mistakes, each one has its own story.
Read more Read less