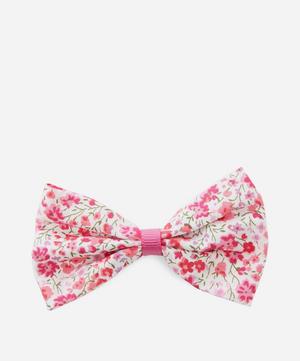 Keep your little one’s hair perfectly coiffed with this adorable medium-sized bow. Adorned with a Liberty London Phoebe print, it has been manufactured by Verity Jones London with a sense of the designer’s characteristically retro-tinged flair.

Verity Jones is a girl's hair accessories label founded in 2011 by Julia Jones. Jones could not find hair accessories on the market that complemented her daughter's outfits, so she began producing her own hair bows and headbands for her daughter, Verity, after which the brand is named, in the muted tones she desired. Each season Jones adds modern colours and styles to the range.
Read more Read less

Online purchases intended as gifts from 1st Dec-24th Dec can be returned by 24th Jan 2021.