Price reduced from $ 39.00 to $ 18.00
Availability: Due to shipping restrictions, this product is not available. 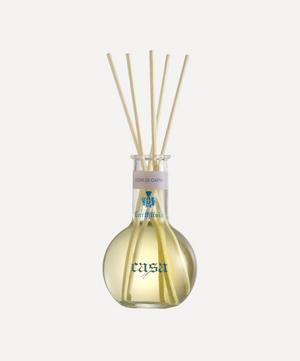 Infused with Carthusia's Fiori di Capri, this reed diffuser allows the scent to circulate gently, yet continuously throughout your home. The Mediterranean notes of wild carnation, still picked by hand on Capri’s Mount Solaro, lily of the valley and oak are blended together with the enigmatic aroma of amber and sandalwood to recreate the original Medieval recipe from 1380.

Selecting the purest natural ingredients from its flower-filled home on the island of Capri and from some of Italy’s other most scent-rich locales, Carthusia makes some of its country’s most admired fragrances. The story goes that in 1948, the Carthusian Monastery discovered perfume formulas written by a 14th century local monk who had accidentally created Capri’s first fragrance from a bouquet of flowers he had gathered for Queen Giovanna d’Angio. Whatever the truth, the house today makes everything by hand and produces all of its exquisite perfumes in limited quantities.
Read more Read less