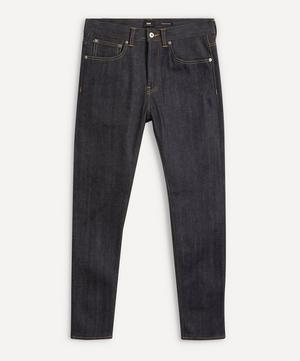 Credited for some of the world’s highest quality denim, Edwin have made quite the name for themselves since launching in Japan in 1947. Say hello to their latest – the ED80 Red Listed Selvedge Rinse jeans.

Widely considered to be the holy grail of Japanese denim, Edwin has been producing some of the world’s most coveted denim pieces since its realisation in 1947. The ED80 Red Listed Selvedge Rise jeans reign as one of the label’s best-selling styles, offering a tapered fit in 10.5 oz denim. Wear alongside a casual Breton top and your favourite trainers for a no-nonsense weekend outfit.

Forward-thinking denim brand Edwin was launched in 1947 in Japan by denim connoisseur Shuji Tsunemi. As no denim was produced in Japan at this time, Edwin created its own ring-spun denim with iconic three-colour rainbow selvedge before going on to invent the stonewash technique that revolutionised the denim industry. Today decades of unparalleled technical knowhow runs throughout Edwin’s collections of hand-replicated, archive-inspired washes and progressive fits.
Read more Read less