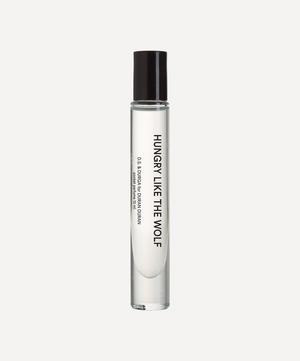 £75.00
This product cannot be shipped outside the UK
This product earns 375 loyalty points
Barcode: 5057865326153
Item No. R245201006
3.5 out of 5 Customer Rating
The link to x Duran Duran Hungry Like the Wolf Pocket Perfume 10ml has been copied
Description Reviews Delivery
Share

Created as part of a collaboration with rock royalty Duran Duran, D.S. & Durga's Hungry Like the Wolf perfume oil smells just like it sounds – think leather and woods under a pale, powdery haze – available exclusively at Liberty London.

In celebration of four decades of innovation, the band approached the Brooklyn-based niche fragrance house to realize four scents inspired by iconic songs from their catalogue. The collection is D.S. & Durga perfumer and musician David Moltz and Simon Le Bon's shared translations of the songs' lyrics and images; fragrant snapshots that range from the surreal vibrancy of the 80's to love and carnal encounters. Hungry Like the Wolf features notes of leather, atlas cedar, cade, sandalwood and patchouli that capture the vibrant energy of the original music video.

“I insisted on this song from the 80’s (although there were so many that would have worked!) The fragrance is animalic and captures some of the scenes in the video - the market, the jungle at night. It is furry, wolfy and badass!” – David Moltz, D.S. & Durga co-founder and perfumer

Apply as required, to pulse points behind your ear, at the bottom of your throat, on your wrist, inside your elbow and behind your knee.

D.S. & Durga is a Brooklyn perfume pioneer. D.S. is a writer and musician turned self-taught perfumer, and Durga is an architect and branding guru. Together they interpret olfactory essence as an art form, working under the notion that aroma can conjure fantastical worlds, particularly of music and memory. From the American wilderness of bygone eras to a heat-soaked afternoon in Mumbai, let yourself be romantically transported by each unique, refined fragrance.
Read more Read less