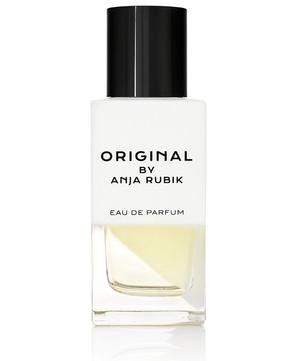 Price reduced from £60.00 to £42.00
This product cannot be shipped outside the UK
This product earns 210 loyalty points

Launched as the models debut fragrance Anja Rubik Original perfume captures the essence of her distinctive personality. Inspired by freedom, both sensual and feminine the scent features notes of wood, amber, floral, green tea and pink pepper, the result is a subtle and personal fragrance that is unique in every regard.

Anja Rubik is a 21st century icon. As a supermodel, she acted as muse to some of the world’s great designers and walked the catwalks of legendary collections. She is also an activist, an advocate for women, a magazine editor, film director and occasional fashion designer. And her debut fragrance – Original – captures the free spirit that defines her character. Built around woody and amber hues, with white lilies, green tea and pink peppercorn intermingling in the heart, Original is as bold a fragrance as Rubik is a model.
Read more Read less