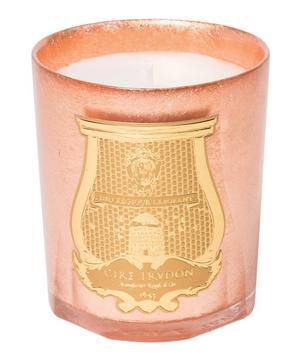 The ultimate choice for an instant ambience, Cire Trudon's Nazareth scented candle showcases the very finest in home fragrance. A mineral and vegetal wax blend captures a festive aroma that ignites an aromatic fire on a starry, silent night.

Having served a clientele that once included Louis XIV and Napoleon, Cire Trudon is the most highly respected candlemaker up to this day, and the oldest in the industry. Nazareth brings a sense of comfort and calm, lighting a ruby red fire of clove, cinnamon and orange which dances in the sacred night. The candle's hand-blown glass vessel is painted rose gold – a limited edition design for the festive season, finished with the brand's iconic golden heritage crest to the front.