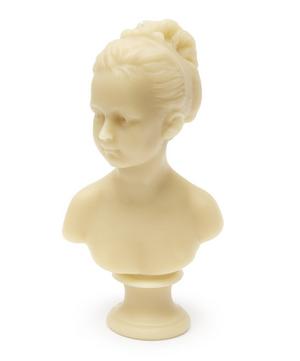 Cire Trudon’s candle bust depicts the young daughter of celebrated architect Alexandre Théodore Brongniart, in an exact replica of a sculpture by Jean-Antoine Houdon – a sweet and tender depiction of childhood.

Cire Trudon’s wax bust range reflects the brand’s rich and venerable history, creating candles for the French nobility since 1643. Artist Jean-Antoine Houdon (known as ‘the sculptor of the Enlightenment’) maintained an interest in the theme of childhood throughout his career, as well as creating effigies of contemporary luminaries such as Diderot, Rousseau and Voltaire. Display this wax bust for a flagrantly opulent interiors accent.